Spain: sign of recovery from high level of insolvencies

Economic growth in Spain is expected to be strong this year (2.3%), although slightly lower than last year.

Within the frame of slower economic growth and weaker external demand due to global trade tensions, Spanish survey respondents appear to have undertaken a more liberal trade credit policy than one year ago. This appears to be an attempt to increase sales to existing or new customers, as well as to protect their current B2B sales from competition, particularly on export markets. This may explain the increased proportion of credit-based sales in Spain over the past year (56.8% of the total value of the sales to their B2B customers was made on credit, up from 43.2% one year ago). This compares to 60.4% regional average. 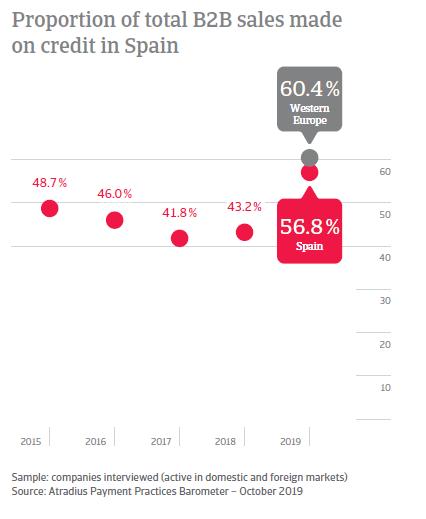 Despite their more liberal trade credit policy, suppliers surveyed in Spain do not appear equally inclined to give their B2B customers longer to pay invoices than last year. Average payment terms recorded in Spain stand at 48 days from invoicing (compared to 47 days last year). Within the current heightened insolvency environment, suppliers surveyed in Spain focus on ensuring that the additional costs to the supplier of selling more on credit do not outweigh the benefits arising from doing so. However, the average payment terms seen in Spain are the third longest observed in Western Europe, after those recorded in Italy (51 days) and Greece (66 days), and are notably above the 34 days regional average.

Prospective customer credit quality assessments made prior to any trade credit decision appears to be the most often used credit management technique in Spain (37% of respondents, compared to 35% in Western Europe). Furthermore, to play down the higher risks and cost of a more liberal trade credit policy, suppliers surveyed in Spain seem to offer their customers discounts to encourage early settlement of invoices (28% of respondents) more often than their peers in Western Europe do (21%). Also the request of secured forms of payment is far more frequently made by suppliers interviewed in Spain (26%) than in Western Europe overall (19%).

Survey findings in Spain reveal that 66.9% of the total value of the B2B invoices issued by respondents was paid on time, up from 57.7% one year ago. Due to this improvement, Spanish respondents cash in past due payments earlier than last year (on average within 63 days from invoicing, down from 69 days last year). This is in line with observations for the region overall, where over the past year payment duration decreased on average to 51 days down, from 57 days last year. Despite the above-mentioned improvement, however, survey findings reveal that an average of 28.7% of the invoices issued by Spanish survey respondents remained outstanding past the due date, and 88% of respondents (versus 85% in Western Europe) were negatively impacted by late payments.

Receivables written off as uncollectable increased significantly over the past year

To manage liquidity constraints arising from late payments, far more suppliers surveyed in Spain (33%) than in Western Europe (26%) needed to take specific measures to correct cash shortfalls. Similarly, notably more respondents in Spain (31%) than in Western Europe (20%) reported to have defaulted on payment of invoices over the past year. Over the same period, there was also a significant increase in the proportion of write-offs of uncollectable accounts, currently averaging 2.4% of the total value of B2B receivables (up from 1.5% last year). This compares to a 2.2% average for Western Europe. This finding highlights lower efficiency in collection of overdue accounts in Spain, negatively impacting business profitability.

51% of Spanish survey respondents (compared to 55% in Western Europe) believe their B2B customers’ payment practices will stay the same over the coming months. In contrast, Spanish respondents expecting B2B customers’ payment practices to improve over the same period are far more (29%) than those expecting a deterioration (21%). However, almost one third of these latter expressed concern over a higher amount of days sales outstanding (DSO) due to an increase in long-term outstanding receivables. In order to protect the profitability of their businesses, 33% of Spanish survey respondents will more often perform dunning activities (sending customers outstanding invoice reminders), and nearly 20% will begin offering customers discounts for early settlement of invoices. For 30% of respondents in Spain, access to bank finance will either remain unchanged or become more difficult over the coming months. In this case, far more survey respondents in Spain (54%) than in Western Europe (27%) will react by cutting operational costs. 30% of respondents report they will have to delay business investment.

Overview of payment practices in Spain

Spanish survey respondents from the machines sector extended the longest payment terms to their B2B customers (averaging 62 days from invoicing). Average payment terms across the other sectors surveyed in Spain range from a high of 59 days in the metals sector, to a low of 37 days in the transport sector.

Over the past year, trade credit risk in Spain has notably worsened in the machines sector, where 35% of the total value of invoices remained unpaid at the due date. However, the greatest deterioration in customers’ payment speed was observed in the chemicals sector, where the proportion of on time payments decreased to 66.4% of the total value of B2B invoices from 74.5% last year. Based on survey findings, Spanish survey respondents from the ICT/electronics sector are the slowest in cashing in past due payments (on average 73 days from invoicing up from 55 days last year).

Spanish micro enterprises are the swiftest to cash in overdue invoices

Payment habits of B2B customers of Spanish micro enterprises improved notably over the past year. The proportion of paid on time invoices increased to 77% from 60% one year ago. Due to this improvement, Spanish micro enterprises are currently the swiftest to collect payment of past due invoices (on average with 52 days from invoicing down from 60 last year). Despite this, an average of 20% of the total value of B2B invoices issued by micro enterprises remained outstanding past the due date. In contrast, both SMEs and large enterprises record an average 33% of past due invoices. SMEs cash in past due payments earlier than one year ago (on average after 68 days from invoicing down from 73 last year). This is also the case for large enterprises, where invoice-to-cash turnaround improved to 70 days from 79 last year).

SMEs in Spain recorded the highest rate of uncollectable receivables 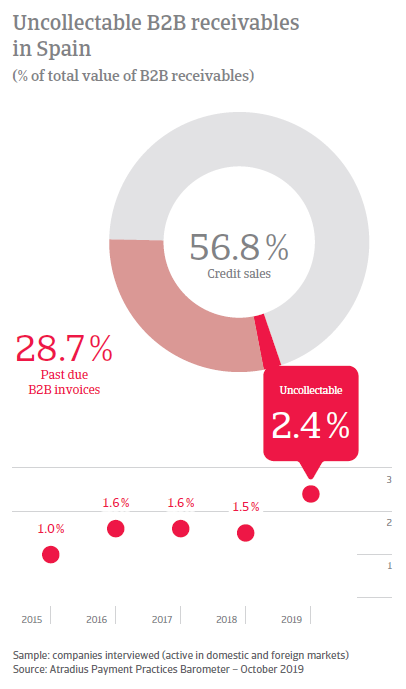 Jacinto Iglesias, General Manager of Crédito y Caución, commented on the report: “As growth is forecast to decelerate, Spanish survey respondents appear to be notably more inclined than last year to sell on credit terms to their B2B customers domestically and abroad. In such a challenging trade environment, sales expansion and the need to stay competitive particularly on foreign markets, where trade tensions are expected to constrain growth, requires focus on credit management.

We are aware that Spanish businesses strive to stay competitive and grow, while at the same needing to protect themselves against payment default risks. Therefore, we offer them the most valuable credit management solutions to compete more effectively in the current global trade environment and protect their liquidity position”.

Spain’s real fixed investment and industrial production are expected to continue to grow and exports are also expected to accelerate in 2015.

Like other Spanish industries, the automotive sector was hard hit by the economic crisis, as lower domestic consumption and difficulty accessing financing led to a slump in the car market.

Good payment behaviour in the household appliances, furniture and consumer electronics segments over the past two years, and no major changes are expected.