China's economy: a strong rebound forecast in 2021, but ongoing Sino-US trade disputes and increasing political strains with the US remain a downside risk 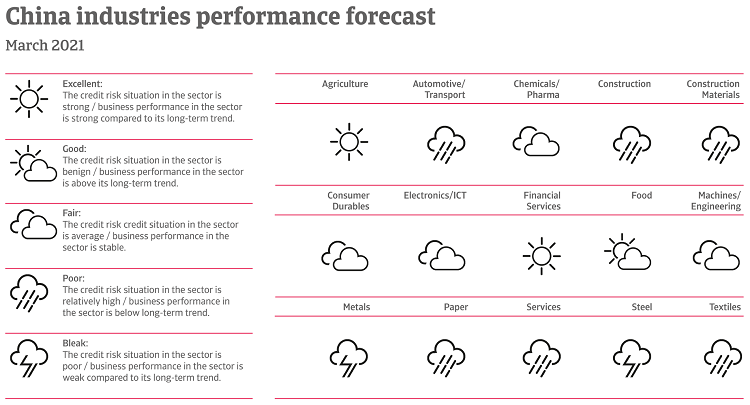 Overall, the political situation in China is stable, with the Chinese Communist Party (CCP) firmly in power. President Xi Jinping has consolidated his power within the CCP and is seen as the most powerful Chinese leader since Deng Xiaoping. So far, the government has successfully contained the coronavirus pandemic. At the same time, the curbing of Hong Kong’s partial autonomy with the implementation of a new Security Law, along with policies to assimilate the Uyghur ethnic minority, have led to widespread criticism in the West.

Despite increased economic interdependence and rising trade and investment flows, China’s political relations with key Asian neighbours are partly strained, due to Beijing’s rising military clout and a more assertive stance in the region. Japan and several Southeast Asian states are worried about overlapping claims in the East China and South China Seas, while last year, Indian and Chinese troops clashed at a disputed boundary in the Himalayas. Beijing has also increased its military presence in the Taiwan Strait.

Despite the recent change in the White House, Sino-US relations will remain difficult, as the issues that led to a deterioration under the Trump administration remain. Next to trade, these also encompass a non-level playing field for direct investments, intellectual property issues, several aspects related to China’s role in the world economy, human rights and rule of law issues, and growing competition for political influence in the region. Due to the differences over political and economic and order principles, neither a significant de-escalation nor a comprehensive trade agreement are in sight.

A marked economic rebound in 2021

In 2020 the Chinese economy grew 2.3%, bucking the global trend. The recovery accelerated in Q4 of 2020, with real GDP rising 6.3% year-on-year, up from 4.9% in Q3. The pick-up was supported by corporate investment, while infrastructure and real estate investment eased. Exports of goods rose by more than 15% in Q4, while import growth eased to 5.3%. Household consumption increased by 3.4%.

Currently, it is expected that the Chinese economy will expand by almost 9% this year, given that a significant resurge in coronavirus cases is contained (while new coronavirus cases have reappeared sporadically, the outbreak seems largely under control across the country). Robust growth of both consumption and corporate investment is likely, due to decreasing impact of the coronavirus on consumer spending and improved corporate profitability following last year’s weakness. The global recovery will support Chinese exports, despite an expected shift from goods to services consumption. Inflation is expected to decrease from 2.5% in 2020 to below 2.0% this year, as a strong currency and lower prices for food and manufactured goods will greatly dampen the effect of higher oil prices.

The administration still faces a difficult balancing act between supporting economic growth and ensuring an orderly financial deleveraging process in the mid-term. In Q1 of 2020, the government and the Central Bank immediately took measures to cushion the economic impact of the coronavirus outbreak. Fiscal measures amounted to 6% of GDP, including new public investments, unemployment benefits, tax relief and social security waivers. The administration injected more liquidity into the financial market, lowered financing costs and increased credit support for companies. The Central Bank loosened monetary policy, raised liquidity in the banking system and created more lending capacity against lower interest rates for chosen companies.

However, in line with the ongoing robust rebound, the authorities have started to tighten monetary policies while scaling down fiscal support. The aim is to put a brake on credit growth and to stimulate the economy to deleverage. There is also a need to keep fiscal spending in check, given the high level of government debt on all levels, combined with off-budget activities.

At about 45% of GDP, government debt is not overly high, but so-called ‘augmented debt’ (which includes the central government, local governments and their financing vehicles, as well as other off-budget activities) is at a worrying level. According to the IMF, this augmented government debt will amount to 96% of GDP this year.

Even more worrying is the huge debt pile of non-financial corporates (at about 160% of GDP), as these partially add to the contingent liabilities of the government. Household debt is lower (about 60% of GDP) but has continuously increased over the past five years, mainly as the result of mortgage borrowing. While the risk of a systemic financial crisis is low, as debt is mainly financed domestically, a renewed pick-up of credit growth could eventually lead to more pronounced financial stress, raising the risks of defaults and market turmoil in the coming years.

The banking sector capital adequacy ratio stood at 14.2% in June 2020, which suggests a sufficient capitalisation. According to official statistics, the non-performing loans (NPLs) ratio was 2% in June 2020, suggesting a rather healthy loan portfolio. However, the actual ratio was likely much higher, since many bad loans are not properly registered. Shadow banking practices substantially raise sector risk, while the strong influence of the Communist Party is leading to less profitable lending decisions and continued operations of de facto bankrupt companies. This partially explains a rather low return on assets of 0.8%. The overvalued property market is another cause for concern, since a strong downward correction would raise the NPL ratio. Although some banks could face substantial losses in 2021, expected government support would likely be sufficient to prevent a systemic banking crisis.

The external financing requirement in 2021 and 2022 is expected to remain manageable at 5.5% of GDP and 6.4% of GDP, respectively. Rolled-over short-term debt remains the main external funding source, followed by commercial bank loans, inward direct investment and international bond issues. Foreign debt remains sustainable in 2021, at 14% of GDP and 81% of exports of goods and services. International reserves remain abundant with 14 months of import cover.

However, several downside risks remain. While the ongoing global vaccine rollout provides optimism for a robust rebound of the world economy this year, the risk of a third wave and further spreading of virus variants could impact the global economic rebound.

Another downside risk is the ongoing Sino-US trade dispute and increasing political strains between the two great powers. President Biden has not lifted the tariffs imposed by the Trump administration, which will continue to have an impact on a wide range of Chinese export goods. Even a further escalation of the Sino-US trade dispute is not off the table, given the ongoing issues (e.g. Chinese subsidies and intellectual property theft) and current tensions in the bilateral relationship. In any case, the trade and technology decoupling efforts of the US, the EU and the Japanese economies away from China will gradually continue in the coming years. This will have an impact on the contribution of exports to Chinese growth rates.

China’s ongoing efforts to rebalance the economy (away from export-oriented investments towards more consumption-led growth) will be reinforced by the efforts of the US and other countries to reduce their reliance on China. Additionally, Beijing puts emphasis on increasing technological self-reliance (e.g. in the strategic fields of 5G, the ‘internet of things’ and cloud computing), in order to reduce its dependence on other countries, in particular on the US. China plans to increase its annual research and development spending by more than 7% until 2025.

The so-called ‘dual circulation’ concept is about improving the domestic circulation of demand and supply with the intention to make the Chinese economy more robust against shocks. At the same time, it is planned to go forward with market-oriented reforms in order to reinforce the domestic growth strategy by attracting foreign direct investments (FDI) and portfolio inflows.

Lower growth outlook in the mid-term

In the time period of 2022 to 2025, economic growth is expected to slow down to less than 5% annually, due to ongoing tensions with the US, and as a result of productivity gains failing to offset the drag on efficiency caused by the self-sufficiency drive under the ‘dual circulation’ model. Other issues that could impact China’s growth potential are a high savings ratio (44% of GDP), the rapidly ageing population and overcapacity in various industrial sectors.

In the current challenging economic times, it is essential for Chinese businesses focus on strengthening their customer credit risk management and debt collection processes.

As several vaccines have been approved and are being rolled out, we expect the global economy to rebound in 2021