With more than 55,000 business failures expected in 2019, the number of insolvencies will still be as high as during the start of the 2008 credit crisis.

The insolvency level remains high in 2019 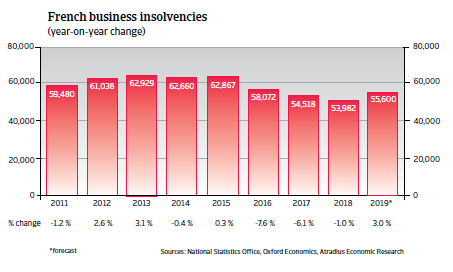 Economic growth expected to stagnate in 2019

The economic expansion is expected to stagnate at about 1.5% annually in 2019 and 2020 due to sluggish domestic demand and lower export growth.

Business sentiment has been impacted by the ongoing social protests and constraints in terms of labour supply and production capacity.

Corporate debt has increased to more than 70% of GDP, and further increases could make French businesses vulnerable to a faster than expected rise in interest rates by the European Central Bank.

However, additional fiscal spending as a reaction to the social protests will lead to a higher budget deficit in 2019, above the Maastricht deficit threshold of 3% of GDP.

France: an increase in payment duration

After an increase from 43.5% in 2017 to 47.5% this year, France has the second highest percentage of overdue B2B invoices in the Western European region.

The payment duration in the industry has increased to 70 days on average, and the payment experience over the past two years has been rather bad.

The global economy is losing steam in 2019 and 2020. Ongoing uncertainty regarding the trade war continues to cloud the outlook.